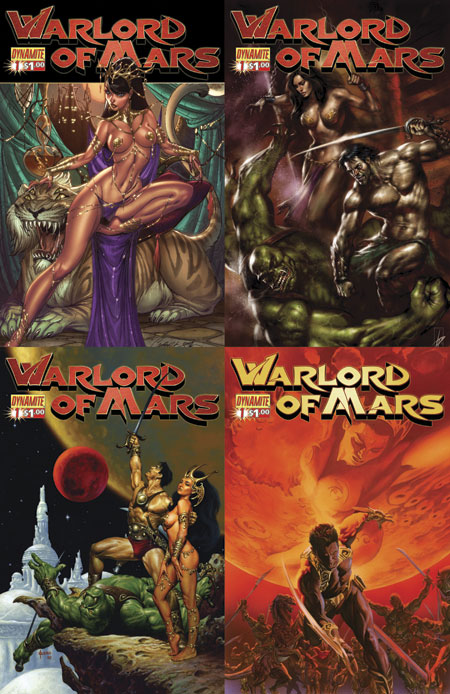 WARLORD OF MARS #1
Price: $1.99
Add To Cart
Physical Copy on Dynamite.com >
The original warrior of Mars returns from Dynamite! Warlord of Mars is an enhancement of the classic Edgar Rice Burroughs story, Princess of Mars! If you thought you knew the story, think again! This series will capture the ?grit and action of the original while expanding on it with new elements. The story is about John Carter, an ex-cavalry officer in the Confederate Army who finds himself mysteriously transported to Mars! Joining him in his adventures there are Tars Tarkas, his Martian comrade, and Dejah Thoris, a Martin Princess. This series is written by Arvid Nelson and is illustrated by Stephen (Avengers/Invaders) Sadowski and Lui Antonio, and features covers by Alex Ross, J. Scott Campbell, Joe Jusko and Lucio Parrillo!
Dynamite, Dynamite Entertainment & The Dynamite Entertainment logo ® Dynamite. All Rights Reserved.
All books, titles, characters, character names, slogans, logos and related marks are ™ and © their respective owners.
Privacy Policy