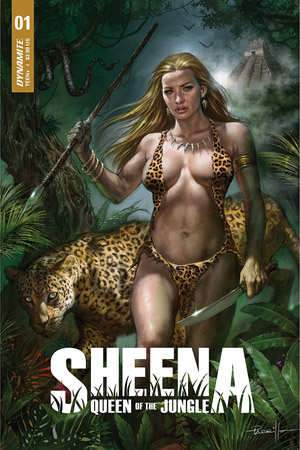 SHEENA: THE QUEEN OF THE JUNGLE #1
Price: $1.99
Add To Cart
Physical Copy on Dynamite.com >
The Queen of the Jungle Returns! Featuring an all-star creative team and the most amazing roster of cover artists this side of the jungle!
Sheena is recruited - that's being kind, she's kind of forced to go! - to enter the "bio-dome" -- an amazing synthesis and nature and machine, where something has gone terribly wrong. Outside the dome, she's faced with human trickery and deceit, inside the dome, she faces the deadly jungle and a fast, murdering mystery.
Jurrassic Park meets Predator meets The Hunger Games. Sheena is Queen of all.
* Sheena debuted in Joshua B. Power's British magazine Wags #46 in January 1938 -- created by Will Eisner and S. M. "Jerry" Iger.
* Eisner said an inspiration for the character's name was H. Rider Haggard's 1886 jungle-goddess novel She.
* Sheena first appeared stateside in Fiction House's Jumbo Comics #1, and subsequently in every issue (Sept. 1938 - April 1953), as well as in her groundbreaking 18-issue spin-off, Sheena, Queen of the Jungle (Spring 1942 - Winter 1952), the first comic book to title-star a female character.
* Fiction House, originally a pulp magazine publisher, ran prose stories of its star heroine in the latter-day pulp one-shot Stories of Sheena, Queen of the Jungle (Spring 1951) and Jungle Stories vol. 5 #11 (Spring 1954).
Stephen Mooney is a comics writer and artist from Dublin, whose work is mainly published by IDW Publishing in the USA. After drawing a series of TV spin-offs, IDW is now publishing his creator-owned pulp adventure series Half Past Danger. He also works as an illustrator, concept artist and storyboard artist in advertising, as well as several Bettie Page adventures for Dynamite Entertainment!
Dynamite, Dynamite Entertainment & The Dynamite Entertainment logo ® Dynamite. All Rights Reserved.
All books, titles, characters, character names, slogans, logos and related marks are ™ and © their respective owners.
Privacy Policy